A downloadable game for Windows

Magical girls are real, but the pay sucks! Join the Union of Magical Girls as they fight to protect the city from evildoers by day, and fight to become unionised by night.

Due to your overwhelming power levels, the enemies can't actually hurt you, so the focus is on defeating enemies as quickly as possible to gain higher rewards and bargaining power when the battle ends.

Of course, not all enemies are brainless zombies, and you'll have to contend with many abilities designed to impede your pursuit of a perfect score!

Outside of battle you'll be able to invest your precious time and money into building up your social links through visual novel style conversations:

How the heck are you supposed to have a social life with no money or free time? After every battle you'll get to lead the Union of Magical Girls in collective bargaining to determine your reward based on how well you fought and how many gems you gathered.

In order to download this game you must purchase it at or above the minimum price of $3.99 USD. You will get access to the following files:

Great dialogue, charming characters and very simple mechanics but the game does a lot with them! Really enjoyed the special levels like the beach levels and in the tower! 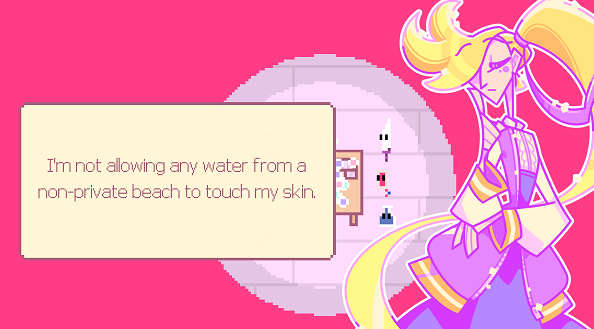 okay, beat the game with max friendship, this was, aggressively amazing? like i appreciate that you can either Make Correct Choices or grind more.

To save the rest of you grinding: You can Make Demands whenever your total gems is about 10x whatever the upgrade cost is. So go make demands down until everything costs 100. Go buy a 100 upgrade, go buy a 50 upgrade. now make demands again.

Repeat this until you can't make demands anymore, then go make a ton more gems and do it again. I recommend bouncing between the Park (because bazooka combos) and the Rooftops (because Sword Beauty can knock people off the edge)

I think I've reached maximum friendship with everyone, except maybe the gacha machine kid.  Is there a certain number of times you need to buy toys for this?

Heya. Try using the other toy machine on the beach, as it has a slightly different lineup.

It worked!  Thanks a lot!

By the way, I like this game and hope to see more from you.  I especially like that there is a feedback loop of getting to know the NPCs and then their friendship affecting how you perform in battle.  And thank you for providing lots of representation for people of color and queer folk.

For some reason swithing haracters dosen't work. O/P dose nothing.

Besides that I very much enjoy playing, it's a nice change from all the other games.

I figured this out you can't swith characters after you moved them. In other TRPGs you usually can swith them if you didint commit to the move, attacked or used end turn button.

Hey, thanks for playing.

Yeah... The battle commands are a bit inflexible. I hope to clean it up for the next game!

That would definitely be an improvement.  I am playing the Switch version and had the same issue.  I would also like to have information like how many turns have passed, how much money you have, and how much free time you have checkable at all times

I got this game as part of the donation bundle last year, and I totally wish that I had played it sooner. I played it for a day and a half and already beat it, I was obsessed. I want that dental plan.

Unable to skip/speed up the sequence where the enemy characters perform their attacks. It makes the battle sequences unnecessarily drawn out.

The beach puzzle is EXTREMELY difficult. You need to do it in an incredibly specific way to get it to work. I am hell bent on completing any game to 100 percent, so I managed it, but it took me a half an hour to figure out one puzzle.

The RNG makes me boned more times than not. I lost a lot during the high level tower because RNG nipped me in the bud. I dont know if I just have bad luck or not.

The names of the characters are never re-iterated, other than the main 3. It's a con for me, because I seem to connect better with a character if I know their name. I completely forget what the purple enemy is called. I called him Villora for the entire time. In my head, he's he/they pronouns. I also dont know the names of some of the people the main character, Bea, is friends with. It makes it hard for me to connect.

The rest. The music? Delightful, and changes each round. The characters are a diverse bunch, and their personalities are incredibly charming. There are no characters I dislike. There's nonbinary/genderfluid representation, which made me extremely excited as a nonbinary person. The gameplay mechanics in general are interesting and (mostly) keep you engaged. The artwork is phenomenal. Overall, I adored this game, and have recommended it to most of my friends within the time that I have played it. I'm so excited for the idea of a sequel.

Thank you for making such a fun game!

I really enjoyed this. I usually have a hard time remembering  game mechanics or get distracted easily but this game did a fantastic job of working around both of those. I like that I wasn't penalized for checking my phone in the middle of play and that I could go at my own pace.

I just finished and it was so so incredibly charming!! I loved all the characters and it really felt like a breath of fresh air in the Magical girl genre!!

Thank you so much for playing! It means a lot.

I am determined to get my dental plan! My current strat is alternate rooftops(high chance of instakill w/sword) and arcade(make sure again occurs as often as possible), this yields me an average of 2000 per cycle, only 70k more until I see whatever dialogue was put for that lol.

also the ending is great lol

Agh... I really should have put a disclaimer in there that the dental plan is impossible to get... Either way I'm glad you've enjoyed the game!

Probably lol, nevertheless, it will be done

I loved this on the Switch.  Still can't figure out how to beat the final battle though.

Thanks! Let me know if I can provide clues.

Just in case it's the issue, you don't have to defeat all the enemies in the final battles, just the leaders (spoiler!)

I  got this on the Switch on sale, and I love it. I must be missing things, because the beach puzzles are real stumpers.

They do get a bit tough! Swapping character order with the shoulder buttons is important, and for at least one of them you need to have unlocked a certain number of ghost allies for the protagonist.

I might make some video walkthroughs one of these days... There's also no shame in switching to Easy mode for a puzzle or two if needed!

HI! I just purchased this game (during the sale), is it possible to get the steam key? :0

Bought this game on the Switch a few days ago and I'm really enjoying it.  Magical girls and unionizing?  That's a good hunk of what I follow on Twitter. :P

Keep up the great work.
Solidarity.

Thank you so much. It means a lot!

Nintendo just sent me a survey about the game, so I told them that the game is fantastic and to give you a big bucket of money. :P

Recently picked this game up. If you don't push hard for the Dental Plan it can be a fairly quick game, I beat it in about 3 days. Enjoyed basically every minute of it.

A few negatives to get out of the way first:

-Needs better menu integration, there's a lot of stuff you can only see when you're in the right screen or place which having a status screen of sorts would make more user-friendly.

-A slightly better tutorial in the opening phases would have been nice. Made a lot of mistakes in the first few missions because of not totally understanding how things worked.

-Some of the messages in battle pass a little too quickly. I'm a quick reader, but I know not everyone out there is. I also wish there had been more small talk and rapport between the characters in battle.

Now onto the positives:

This game is fun, it's cute, and it's actually got a lot of nuance to the story you may not at first realize. The characters are all fantastic, I actually wish you could spend more time with them and do more with them when everything's said and done because they're so well written and designed. The character art adds plenty of style and personality to everyone as well, so that certainly helps.

Fantastic game. Looking forward to a sequel (and the ending certainly sets one up) and an animated series (Netlfix - I'm looking at you, call this guy ASAP I want a series based on this IP immediately!).

You can buy worse things for 4 bucks, but you can't buy many better things for that amount. Can't afford it right now? Unionize and demand a copy of it in your contract. ;)

Very belated thanks for the review. It means a lot!

Hey, congrats on releasing your game, its such a good job.

I was wondering if you are interested in getting your game translated into Latin America's Spanish.
If so, I'm interested in doing it.

Once again, congrats on your game, currently enjoying it on my Switch!

Hi! I'm definitely interested in arranging translations in the future, but I'm not quite ready to make plans or commit just yet. (Need to focus on actually making the English release mildly successful first!)

However, I shall keep you in mind for if the time comes.

Sounds amazing!
I really hope that this game go the way you want!

It has an amazing potential and the design its pretty good, simple enough, but fun! (plus the art style its really good!)

Once again, if you need my assistance in the future regarding...anything in Latin American Spanish, please, let me know, I'd be happy to help!

So is this about finding fairies and mascots who won't deceive you and avoiding kyubeys?

Oh, you'll definitely be making a contract, it's just up to you how good it is!

I loved it! Can't wait to dig into it some more!!

Hi! I'm definitely interested in arranging translations in the future, but I'm not quite ready to make plans or commit just yet, as I wouldn't want to work with a translator unless I was able to pay them.

However, I shall keep you in mind for if the time comes.

thank you so much. anyway I would have done it for free. 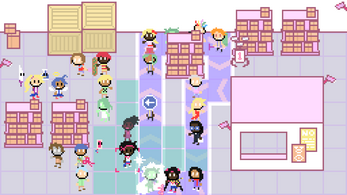 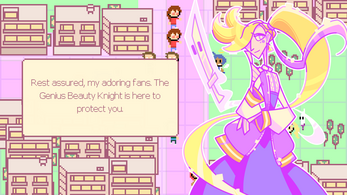 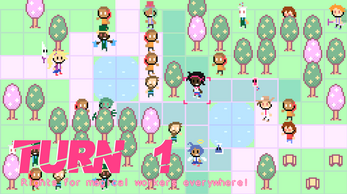 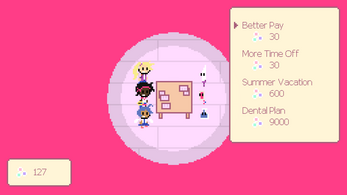 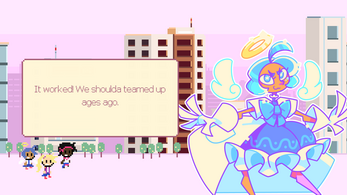 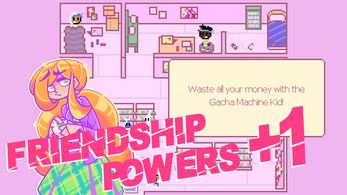 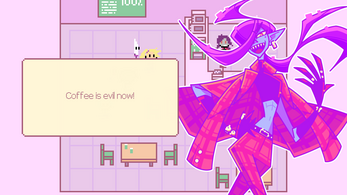